This cartoon is tendentious and carries a dangerous message: 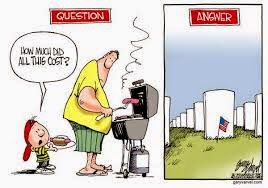 We do not owe everything we have to the military. Our rights, benefits, and living standards are not bestowed on us by the Pentagon. In fact, constant warfare and a bloated military establishment are the most direct and dire threats to constitutional government there is, as Madison famously pointed out: Of all the enemies of public liberty, war is, perhaps, the most to be dreaded, because it comprises and develops the germ of all the others. We should honor those who have fought and died in wars, but we should do so from an honest perspective. We do not need not to distort history or succumb to militarism to pay tribute to the victims of U.S. wars. I dont wish to give offense, but no American soldier has died defending our freedom since World War Two. Ho Chi Minh, Manuel Noriega and Saddam Hussein posed absolutely no threat to our freedom.

Terrorists may threaten our physical safety, but they have no ability to subvert or destroy our liberty. Homegrown flag wavers are chiefly responsible for doing that. Sharia Law is not coming to America and never could, not because of the military, but because of American popular culture, which is totally antithetical to fundamentalist Islam. The burka is no match for American Idol or Dancing with the Stars, not even close. Our crass stupidity will save us from Muslim theocracy, brothers and sisters, count on it.

The invasion of Afghanistan may or may not have been just retribution for 9/11, but our freedoms werent threatened by the Taliban and their medieval beliefs. None of the grubby little skirmishes weve engaged in over the last half century had anything to do with preserving our freedom. All they did was enrich a few privileged industries and make us hated everywhere in the world.

This constant, uncritical praise of the military is deeply unsettling. It creates a category of individuals  soldiers  and an institution  the military  that are effectively beyond criticism. This is pernicious in the extreme and characteristic of fascism, not democracy. It is also reflective of deep insecurity: Its not a coincidence that all of this hyper-inflated soldier love is occurring while the U.S. is in palpable decline and losing wars.

Our exaggerated military worship is just one more gaudy extreme in a culture full of gaudy extremes, and stems from the same source: Our inner emptiness and moral bankruptcy. Almost everybody, I think, senses on some level that there is something seriously askew in America. Ever since Bush the country has had a slightly eery, slightly alien feel to it. If you are poor or working class, which I have been most of my life, there is a distinct atmosphere of hostile condescension that wafts down from every American institution. You are treated like complete shit and quite deliberately held down. You experience the utter hollowness and bullshit of our national rhetoric. You live the gap between how we talk about ourselves and what we really are.

One day, you wake and realize that every goddamed institution in the country is ripping you off, and they are not delivering the goods anymore. The trains arent running on time. You dont get rewarded for hard work. The quality of everything feels diminished, and there is precious little that is wholesome or virtuous. You cant even eat at McDonalds for under eight bucks anymore, and that shit is practically inedible, and the little plastic and nylon flags you buy on the Fourth of July are made in fucking China!

So what do we do? Start looking for someone or something to believe in. We start groping around for heroes. But who in this increasingly ugly country is heroic? Banks and corporations are run by out and out thieves, none of them even remotely loyal to the country. Our politicians are low-grade non-entities completely in hock to said thieves. The few who actually grasp the hellish situation were in show little inclination to do anything about it because we are not their concern. Athletes are venal, grossly overpaid cry babies and felons;  lawyers are lawyers, astronauts are dull, and most celebrities are vapid twits. Whos left? Soldiers, and, of course, first responders. That is to say, cops and soldiers. This is not healthy. This is ominous.

I maintain that a healthy society of mature grown-ups doesn have a compulsive and childish need for heroes, and that it wouldnt fetishize authority figures.

I have students who have never been alive when the US wasnt at war.  Im happy to report that many of them display a healthy cynicism about it and occasionally make sarcastic quips about Amurrica! (I have nothing to do with this. I never preach political viewpoints to kids). Nevertheless, this soft core militarism has been the permanent background music of their lives. Bombing, flag waving, drone strikes and sticky soldier worship is the norm for them. The idea that peace, not war, should be the normal state of affairs in our foreign policy is basically unknown to them. Its just not part of their calculus. They do not necessarily support war, nor do they feel compelled to oppose it. It just is and they accept it, just as you accept smog and traffic jams, work, death and taxes. This is mission accomplished.

Thank you for this. Even as a veteran, in a family of veterans with a long history on both lines of military service, I agree with this.

I am terrified that as an economic draft replaced the other kind, we end up with 99% of Americans never serving and a !% making it a family tradition -- mostly poor, many ill-educated or uneducated; all too willing to "never question why, but do or die". And we ritualize and "honor" what becomes meaningless as a government does not HAVE to account to a mere minority of military families for what is done with flesh, blood, and bone of their loved ones.

The Patriot game may be a little different here, and this song has many versions, but Liam Clancy talked the talk and walked the walk. Here's to the parting glass, as so often and well done by Liam.
https://www.youtube.com/watch?v=WlwMs2EC3QI

But the REAL honest to goodness antiwar American, the most dedicated I ever knew of was this guy. They broke the mold but I'm trying.

I've heard this song many times, but did not realize it was meant to be sung in the angry tone that Marleana does here. Never happy. Sadness and anger are necessary to convey the meaning. Yes, OHollern. Anger. It's the only correct response to unnecessary wars. Let's all be angry at our leaders. And stop the next war.

Here are some of our modern heroes.

We think we know how to run things better than any other nation. Ah yes, we we feel obliged to say with a nod to humility, we sometimes make...uh... mistakes are made. Okay,okay, our infrastructure is .. uh ... but our economy is ... Listen! We have a lean, clean, and efficient governm ... right down to our local police who... you know... Count yourself lucky when we send in troops to clean up messes y'all have gotten yourselves into.

Can I have one of those flag pins now, please?

We need some national projects. Something to make the people here in America see something greater than themselves.
A song illustrating the principle: Try "The boys in green" by the great, great John McCutcheon for what I'm talking about, but this time not in labor, but in song. Sorry, buy the album to hear that one. Youtube doesn't have it. Here's the link to the lyrics. http://www.folkmusic.com/lyrics/boys-green

Canada did it once. Commissioned the great Gordon Lightfoot to write a song about the building of the Canadian Railroad that spanned the nation. Us, we drove a lousy gold spike, with lousy regrets to Ron Paul. And thus Lightfoot once wrote what is considered by many to be the greatest folk song ever written. Sung here by young Canadians. But COMMISSIONED by the country of Canada. Paid for with tax dollars. Imagine that. Pete Seeger made it to the 2008 coronation in America so let's start paying some future Pete's to outdo those damn Canadians who did it first. Frances Scott Key didn't get paid and it isn't worth a darn for a national anthem IMO, so let's commission a new one. As Canada, with its puny tax base outdid the world with the best English folk song ever written, at least according to far too many, including Americans,
https://www.youtube.com/watch?v=BF1g4NcINvQ

As to why, see my comment about the future of Monsanto corn when The New York crank approves that little comment about our Midwest water problem, solvable in ten thousand or one hundred thousand years, depending on which version of my memory is correct. But I can't wait that long and nobody else can either. So we need some music to get everybody pumped up. And Pete is gone. And we need a replacement. So do it before you leave Mr. Prez. Time's a wastin'

Speaking of National Projects, this song came as a gift, a lucky find, Republicans or Democrats, I don 't care who or which , take it and run all the way to home plate at the lady's statue and put your foot on the plate with this one. It will carry our national need home. Just listen. and I dare anybody to say I'm wrong.