I was hoping we wouldnt hear much from Condoleeza Rice anymore. After all, theres no reason we should. Shes already achieved enough for one lifetime. Let her go away and play cribbage with Paul Wolfowitz somewhere and leave the rest of us alone. Shes been national security advisor and secretary of state, and at one time she had an oil tanker named after her. Now she has a sinecure at Stanford that gives her plenty of time and money to buy all the shoes she could ever want. She can hire some hack to ghostwrite her memoirs, and whenever a foreign policy ‘expert’ is needed on the Sunday talk shows, she’ll be invited on each one to give us all a leaden dose of conventional wisdom. What more could she possibly desire?

If anything, you’d think Condi would long for obscurity and shun the public eye. Advertising that you were a part of GW Bush’s foreign policy team is like bragging that you have genital herpes. Unfortunately for us, though, she might be getting back into national politics because she has three things going for her that Romney might find desirable in a running mate: shes black, she has a vagina, and she possesses foreign policy credentials. The trifecta. I think she also comes from modest beginnings, so in the coldly calculating mind of Mitt Romney she might bolster his appeal with the 99% as well.

Do a lot of people actually cast their votes on the basis of such superficial things? Would choosing Condoleeza Rice really sway women and minorities to vote for Romney, a filthy rich white guy whose church didn’t allow blacks to become priests until God dropped by in 1978 and said it was okay? I dont know. I dont care. Its just politics as usual. Ill let Chris Matthews and Cokie Roberts talk the subject to death. There is one potential upside to this, though: if he was allowed to take off the kid gloves, Biden would eat her alive in a debate (but nice guy Obama would almost certainly forbid this).

Anyway, if Romney does select her as his running mate, well know there wont be any significant changes on the foreign policy front. The military industrial complex will go chugging right along, same as always, with Condi & Co. at the helm chortling about American exceptionalism. Its an uninspiring prospect, to say the least.

Dr. Rices views on foreign policy are American Establishment Orthodoxy 101. They could have been cribbed from Henry Kissingers magnum opus Diplomacy, which is American Establishment Orthodoxy 101. I saw her giving a talk about the Cold War on CSPAN years ago, and I was astonished at how utterly dull and conventional her opinions were. She didnt say a thing that wouldnt have fit right into a Ronald Reagan speech or a high school history text. There wasnt a single incorrect thought.

And nothing much has changed, although she, or her speech writers, have learned the fine art of partisan sniping. Here are a few remarks she made while endorsing Romney:

If America is going to rebuild its strength at home, rebuild its sense of who we are, it needs a leader that also understands how really exceptional the United States of America is, and is not afraid to lead on the basis of that exceptionalism, Rice told about 300 donors. The only thing that people dislike more than unilateral American leadership is no American leadership at all.

When did we begin to lose a sense of who we are? When Bush invaded Iraq and set up torture chambers, maybe? What created the sudden need to rebuild our strength at home? Could it have been eight years of malignant neglect at the hands of Bush-Cheney? Our economy and infrastructure started collapsing well before Obama’s inauguration, an incontrovertible fact that Republicans studiously ignore. Moreover, I seem to recall that Obama bailed out GM, which lowered the unemployment rate in Michigan, but that potentially strong leader Romney, who recognizes American greatness, would have allowed it to go bankrupt. So much for Mitt’s prescription for rebuilding strength at home.

George W. Bush was nothing if not a forthright advocate of unilateral American “leadership,” so much so that it turned the US into an international pariah. Condi was mute about it then. Now she informs us that people dislike it. Isn’t that nice? Once again, the world must suffer and die while our slow-witted elites catch up to the curve. And is she honestly suggesting that under Obama the US is exercising no leadership at all? Great. I guess that means if Romney gets into the White House he’ll abolish drone strikes, kill lists, and other manifestations of weak leadership, of “no American leadership at all.”

It’s all crap. They know it’s crap, we know it’s crap, and they know we know it’s crap, but they look us dead in the face and say, “Screw you! Truth and falsehood are irrelevant. Reality doesn’t matter. The past is whatever we say it is. Winning is all that counts. My party uber alles.” These cretins will say and do anything to gain power, and since the policies of every administration are broadly similar, they aren’t seeking power for any positive reason. They just want power for power’s sake. They are scum.

By the way, Condi endorsed Romney at a mansion called Carolands in northern California. We can blather on all we want about democracy. The fact is, those are the kinds of places where all the important decisions get made. This it what it looks like: 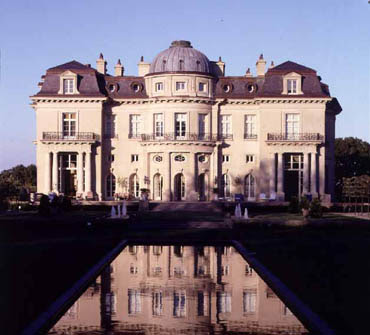 I had never heard of it before, so I looked it up on Wikipedia. It’s undergone many changes of ownership since its construction in the nineteenth century, but now, surprise surprise, it belongs to a couple of money managers, heirs to the Franklin Templeton Investment fortune. Though it’s no longer open for public tours, it is available for “occasional charity events and fundraisers.” Surprise surprise again, and it’s not even your birthday!

G.W. Bush never made it to San Francisco, but he did find the time to get to Carolands in January 2008 and gin up 1.5 million for the RNC. That’s what strong national leaders do to rebuild strength at home, you see. They immediately begin raising cash with which to undermine and destroy their successors.

The Wikipedia entry ends on an interesting note: “Although the Caroland’s walls look like large granite blocks, they are actually hollow, and made of expanded metal lath and plaster.”

A pretty but empty facade. How fitting. Hollow Rice endorses hollow Romney in a mansion made of hollow walls. American exceptionalism marches on!